The Death Of The Billable Hour 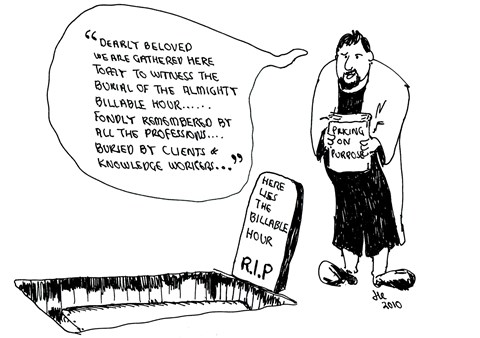 There are several excellent commentaries on the recent Georgetown/Thomson Reuter's 2017 State of the Legal Market (US) but Richard W Smith's concise observations titled "Death of the billable hour is nigh-really?" is one of the better ones; especially on pricing and for Australian audiences. I recommend you read both.

Much of the profession's discussion on the Georgetown/Thomson Reuters Report has centred around the following comments:

One of the most potentially significant, though rarely acknowledged, changes of the past decade has been the effective death of the traditional billable hour pricing model in most law firms. This isn’t to suggest that most firms have done away with billing based on hours worked; indeed the majority of matters at most firms are still billed on an “hourly basis.”

But focus on that fact alone misses a fundamental shift that has occurred in the market.

This change has been overlooked principally because of a definitional problem. In much of the writing on this subject, the focus has been on so-called alternative fee arrangements or “AFAs,” pricing strategies that are based on fixed-price or cost-plus models that make no reference to billable hours in the calculation of fees.

Since other pricing models typically incorporate some reference to billable hours, it has often been assumed that only AFA’s are genuine non-billable hour alternatives and every other approach is simply business as usual.

That conclusion, however, overlooks a major shift that has occurred over the past decade: the widespread client insistence on budgets (with caps) for both transactional and litigation matters. (my emphasis)"

I agree with Richard's assessment that, to be frank, caps are crap. They benefit no one and if anything, have helped extend the life of time-based billing.

While I would not score an invitation, I would love to read the eulogy at the billable hour's funeral but alas, while it is sick and has been for a long, long time now, it is experiencing a slow tortuous death and not quite ready for burial. It is kept on life support by any number of those with misguided and/or vested interests.

When can we see the end of the billable hour in professional services?

I strongly believe the billable hour will never totally be killed off until the providers of legal services make a paradigm shift and change their business model.

It seems every week around the world, thank goodness, newlaws/nextlaws/disruptors and some innovative incumbents’ law firms (plus many in other professions), have made or are making the paradigm shift to totally change their business model to something more meaningful and fulfilling to both themselves and their clients.

However while Oldlaw still leverages people x time x hourly rate in the misguided belief that TIME is not only a cost to a law firm but THE major cost (and therefore continues to measure and reward TIME over all else instead of measuring what really matters), billable hours, either naked or in drag will hang in there.

For so long as time is recorded, firms will forever remain fixated on the Oldlaw "we sell time" model and will always default and compare everything to time which in turn perpetuates faux AFA's (of which capped fees are but one example) at the expense not only of genuine strategic pricing alternatives, but a better and more sustainable profession.

A billing model change to fixed fees for example, without a genuine business model & mindset change, won't cut it now or in the future.

Widespread dissatisfaction with the billable hour in professional services but…

There has been increasing widespread dissatisfaction with the billable hour, and the profession's real innovation and collaboration killer, the time sheet, for well in excess of a decade. The profession can bleat all it likes about clients demanding more certainty around price and wanting "more for less" but it can't say it was not warned and cannot complain it didn't bring all this on itself.

The profession can also not complain that they are blissfully unaware of any alternatives to time-based billing when genuine alternatives have not only been written and spoken about during this same period, but an increasing number of legal services and other professionals have been successfully operating a different and better business model for several years now.

Regrettably, the majority of the profession has been exposed to all this but has chosen to either ignore it completely or apply a band-aid to a festering and potentially mortal wound and then only when forced to by clients.

The current Oldlaw business model is of course not sustainable; "we are investing in technology & improving our processes to get work done in quicker time but we are still going to bill you by time" is a business model heading in only one direction

Regrettably Mark Twain's quip "the report of my death was an exaggeration" rings true.

It doesn’t have to be of course, but perhaps the legal profession needs to go through this death by a thousand cuts for another decade or so before it will make real change?

There will come a tipping point and then the late majority and the laggards will be falling all over themselves, and in the meantime the innovators and early adopters will have moved on.

This will all take longer than it should and longer than any opportunistic billing model change, but the change will be structural and long lasting, and the legal profession, its clients, business generally and the community will be all the better for it.