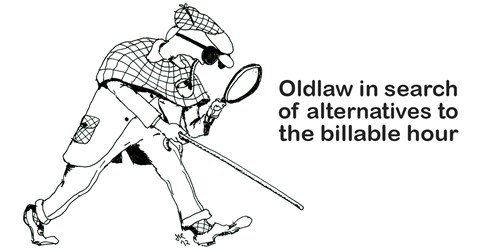 An Oldlaw partner said to me that while a small minority of lawyers may have abused time-based billing, overall hourly billing is "good" because it is "...accurate, transparent and ethical".

This of course is not the first time I have heard (and read) similar comments as further justification for maintaining the billable hour model and indeed, when I was still a practising lawyer I used similar terms myself.

While there are several purported justifications for the existence of the billable hour, for instance:

I, like many, challenge the notions that the charging by time is "accurate, transparent and ethical".

"The billable hour is accurate"

Accurate = to be correct, exact, without any mistakes.

It goes without saying that if you charge by time you must keep a record of your time. And if your contractual engagement with your client is to charge by the hour or part thereof (broken down into 6, 10 or 15 minute units or whatever other iteration the management consultants, most of whom by the way do not charge by time themselves, dream up), it follows that your time recording must, at the very least, be reasonably accurate.

Ever since the introduction of time-based billing, Oldlaw firms of all shapes and sizes have been drilling into their "fee earners" (an awful expression, only exceeded by the derogatory term "non fee earners"), the importance of accurately recording all billable time because that is what is primarily measured and rewarded.

Manual recording by time of course has moved to automated recording of time with a plethora of practice management vendors out there extolling the virtues of their systems which "capture time”.  With mobile time recording devices I can even record time out of the office; on the train, over dinner, in the shower, or in those little intimate moments with my loved one when my mind strays to thinking about a client matter.

Alas! Even with all the help from technology, we still cannot seem to get time recording accurate.

Why? Simply because time recording requires human input to either manually record time or to push a button to start/stop automated recording time. It is physically and psychologically impossible for human beings, no matter how good their intentions, their intelligence or their "time capture" software, to accurately record time spent on anything.

Law is not practiced in some kind of vacuum. Like most of us, lawyers are continually interrupted on whatever they are working on by emails, by colleagues (including those "non-fee earners"), by phone calls, etc; so unavoidably accurate time recording gets "overlooked".

At worst, we forget completely the time we spent on something maybe for always and sometimes for days or even weeks (often until the managing partner sends an all firm email on the second last day of the month reminding all that "chargeables are down and all fee earners must lodge their timesheets");,then we "guesstimate" or we simply make it up.

"The billable hour is transparent"

Transparent = easy to perceive or detect, open to public scrutiny

I confess to never being sure why this statement has any ring of truth to it. It just seems to be one of those sayings that rolls easily off the tongue and if you say it often enough people will believe it.

I suspect the "transparency" part stems more so from some notion that "you only pay for the time spent" rather than any real "openness" context.

Of course there are times when a client knows or observes when their lawyer is physically doing something, such as attending the same meeting, speaking to them on the phone etc, much like watching your lawn mower man mow or your window cleaner clean. Theoretically it is even possible for someone, including a client, to personally watch their lawyer (or watch through technology) performing a task like drafting a document or dictating/typing an email etc.

However, as we know (and as many lawyers are only too quick to tell me) the real value of a good lawyer is not so much in their physical competencies but more by their intellectual and social competencies (often called "thinking"). Until technology invents a chip that is inserted in our brain that is somehow linked to a client matter number to track when you are actually thinking about a client's matter, genuine transparency has a long, long way to go.

"The billable hour is ethical"

Ethical = morally good or correct, in accordance with the rules or standards for right conduct or practice.

Now here is where it gets really interesting. The ethical justification for the billable hour seems to be intrinsically tied to the rules or standards in the legal profession (originally set by the profession itself).

It has been an accepted practice for so long, to retrospectively bill for their services either by use of an agreed hourly rate or some sort of scale of fees, that the legal profession has convinced itself at least, that this billing model must be ethical.

Of course these retrospective billing practices meant that, essentially, clients and their lawyer had no way of knowing what the fees were in advance because the task, activity or time has not yet been undertaken.

Regrettably, as is the case in any industry or profession, there is a minority of providers of legal services who choose to take advantage of these accepted retrospective billing practices. Even though an argument could be mounted that retrospective billing is pretty much the perfect crime, the profession (and in many jurisdictions, the appropriate regulators where the profession failed to, or was slow to, respond) introduced codes of conduct /rules/regulations to try to ensure clients were protected as best they could be.  This purportedly protected anyone aggrieved by the fees charged by their lawyer, an opportunity to have those fees assessed, determined or "taxed" (a quaint legal term) to see that they were in essence "fair and reasonable".

One of the inherent problems with even an independent third party assessing a lawyer’s fee as "fair and reasonable", is that it too is an after the event determination and often is of little comfort to a client if the client was not expecting the quantum of such fees in the first place ("Bill Shock").

For so long as the legal profession enjoyed a monopoly on the provision of legal services and for so long as clients were prepared to accept these billing models, such practices were deemed "ethical".  Note however, that neither of these are pricing models; they are merely billing models as billing takes place after the work is done whereas pricing takes place before the work is done.

And guess what, even in the legal profession the world changed. For starters lawyers no longer had a monopoly on the provision of many of their traditional legal services. Our "Grand Bargain" as coined by Richard and Daniel Susskind in The Future of the Professions-How Technology Will Transform the Work of Human Experts was coming to an end. The profession became more deregulated and more and more clients wanted and insisted upon greater certainty and predictability in legal fees.

As we know, perceptions and acceptance of what constitutes ethical and unethical conduct of course change in accordance with the times, particularly as our knowledge increases and community and business norms evolve. The medical profession is a prime example where doctors who once undertook and prescribed cures and remedies in the past, based on accepted medical and scientific knowledge at the time, would be judged professionally incompetent and negligent if they applied such remedies today.

And so it is with the legal profession.

For many years there have been any number of articles, posts, surveys, and research undertaken by many commentators, observers and participants in the legal profession, including members of the judiciary, bringing into question the ethics of the billable hour and what perverse behaviours it encourages and entrenches into firm cultures.

An article in the ABA Journal titled "Not competent in basic tech? You could be overbilling your clients—and be on shaky ethical ground":

"there are no business, practical, or ethical excuses to avoid learning about, understanding, and adopting technology. Yet, at the same time, we must recognize that there are perverse incentives that encourage lawyers to refuse to learn technology—the main one is the billable hour. Increased financial rewards for increased hours encourage lawyers to bill as much as possible for every matter. It’s an incentive structure where lawyers are working in opposition to their clients’ interests.

The seemingly-innocuous decision to skip technology training can lead to overbilling. And if you are deliberately avoiding technology because it means that you can bill more, then you are definitely overbilling. Do not confuse this with a clever billing scheme. This is not “just business”—this behavior is an ethical breach."

My friends and colleagues, Ron Baker & Ed Kless had a great discussion on the ethics of time based billing on their Soul Of Enterprise VoiceAmerica weekly radio show which is well worth listening to. Here is a link

"A professional is someone who is responsible for achieving a result rather than performing a task."

The Oldlaw business model reduces everything any lawyer does to a series of tasks and I ask how much longer can Oldlaw get away with claiming it is ethical to ask clients to pay for an activity or a task when clients do not even know what the task will be? After all every law firm; I repeat every law firm, could agree its price(s) upfront. They simply choose not to.

If none of the above convinces you about the ethical challenges of the billable hour, perhaps have a go at applying The Golden Rule:

If hourly billing were so ethical, would we want it to be universal?

I have never hid my distaste, my biases and my prejudices of the billable hour and the "we sell time" culture that has permeated most professional firms, but especially law firms, over the last few decades and the deleterious effects this has had, and continues to have, on the reputation and values of the legal profession, those that work within it and with it. It is truly hard to believe that there are some out there still claiming its virtues but they have their own vested interests in ensuring this model survives long after its "use by" date.

The tide has turned I am pleased to say but there is still a long way to go before we eradicate the billable hour and its partner in crime, the timesheet, from the legal profession. While an ever increasing minority have seen the light to a better way of practicing their craft for the benefit of not just themselves but for their clients, the majority of lawyers, instead of being proactive and changing their business and pricing model for the better, wait until market forces impose change upon them.

In the meantime Oldlaw, however you care to justify the continuance of time based billing, if you use terms like "accuracy, transparency and ethical" you must accept that increasingly your customers, and indeed your "fee earners", see these justifications as self-serving rhetoric. And a rhetoric that simply does not stand up to any objective and reasonable examination.

We were taught, by our parents at an early age, that ignorance of the law is no excuse. Feigning ignorance of better business and pricing models is no longer an excuse for Oldlaw either.